Have your say on potential changes to firearms licensing

Elected Police and Crime Commissioners are inviting the public to have their say on potential changes to the licensing of firearms and shotguns in England and Wales.

Chair of the Association of Police and Crime Commissioners Marc Jones said: “There has been heightened public concern following the recent shooting of five people in Plymouth. I’d like to take this opportunity to extend my sympathies to all those affected by that tragic incident, and indeed to all victims of gun crime.

“The Home Office is currently reviewing arrangements for the licensing of guns and will shortly be introducing new statutory guidance to be followed by all police forces. Police and Crime Commissioners are elected to be the public’s voice in policing and so we want to hear what the public thinks about these issues, so we can feed those views to the Home Office.”

The APCC’s short survey asks for the public’s views on things like the amount of scrutiny of medical records and social media posts that police should undertake when granting or renewing a license; and whether or not an applicant should pay the full costs of having their request processed.

Mr Jones added: “We want to hear all from sides including people who are, or have previously been, a registered firearms licence or shotgun certificate holder. The public may be surprised to hear that there are more than half a million licence holders in England and Wales, who legally own nearly 2million firearms. We know the overwhelming majority do so safely and responsibly.

“So, while it is absolutely right that we have a discussion on licensing, we should be careful to ensure any changes to guidance or legislation are proportionate, reflect the public’s views, and above all are effective at keeping people safe.”

The survey, which can be completed online, takes just a few minutes and will remain open for responses until Wednesday 20 October. 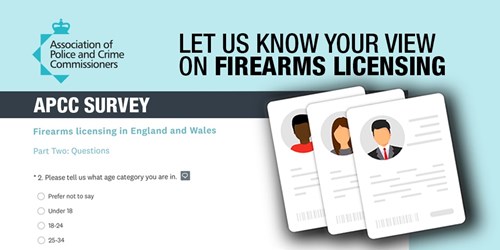